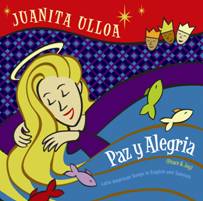 If music is the universal language, then mariachi is its Latin accent. Some think Juanita Ulloa speaks the language brilliantly. Juanita is a proponent of Operachi, a new Latin-American sound which combines classical opera with a meringue of traditional mariachi rhythms. Juanita sees her self as the creator of a new genre of music and the catalyst for the creative irreverence attracting music fans. Her music claims to be "an in-your-face fusion of classical stylings and contemporary harmonies."

Juanita believes that because she is is master of the mariachi medium, she doesn’t have to sweat the test of tradition. She feels free to play with new rhythms, sounds and ideas. She profeses an excellent knowledge of music history, and her musical inspirations ricochet from Debussy to Leonard Bernstein to Augustine Lara to Maria Grever.  Some consider Juanita Ulloa one of the most gifted mariachi singers.

In "Paz y Alegria” (Peace & Joy), her new album, she sings of a peace and joy that embraces all religion.  Juanita endeavors to make her lyrics seem like part of her emotional biography, drawing out a note until it seems exhausted, then punctuating it with a lyrical catch in her throat that sounds like the small sobs of a strong woman, or sometimes it is closer to the full-throttle glottal attack of a Linda Ronstadt. Sometimes Juanita slows down the tempo, teases out the vowel sounds, adds a huapango twist of a rhythm from Mexico or a fandango beat from Spain, or the big band sound from the forties,  or a fiery Lando rhythm from the Afro-Peruvian culture.

Born in North America into a bi-cultural American Panamanian family, Juanita was raised in several Hispanic countries including Mexico, Spain and Panama. She earned her music degrees at Yale and UC Berkeley and trained at the Nice Conservatory in France. She has toured the world with solo performances in Spain, Peru and Mexico. She is especially drawn to Mexico and embraced Mexico’s rich musical history. She has performed ranchera songs, ballads and boleros in her own vocal style.

After her first taste of circus-cannon celebrity, Juanita decided to leave something more substantial than breadcrumbs behind her to mark her way back home, the result was Juanita’s last and most lauded album “Mujeres & Mariachi” a  homage to Mexico’s pioneering female composers.  Juanita’s ambition is to be a bridge between the United States and Latin America.

"When I want to go deep into my Mexican roots I listen to Juanita Ulloa’s voice. It’s a privilege to allow ourselves to be seduced by her voice, it allows us to relax and celebrate amongst each other. It keeps me from being lonely. Whether I am in Mexico or the USA I’m at home listening to Juanita!" – Juan Barragan, News Anchor, Univision KDTV-TV Azteca-El Universal.